I am trying to implement a Biexponential shape conductance base synapse:

\theta, \theta_H and \sigma are constants. Adding H_{\infty} is the question.
Following the documentation I came up to this :

I think this should be :

\Theta is Heaviside step function. But I used the documentation method for the following.

for two neuron and a connection from 1 to two, the neuron 1 get and input current and I record g_syn and I_syn from the second neuron. tau_1 = 2ms, tau_2=10ms 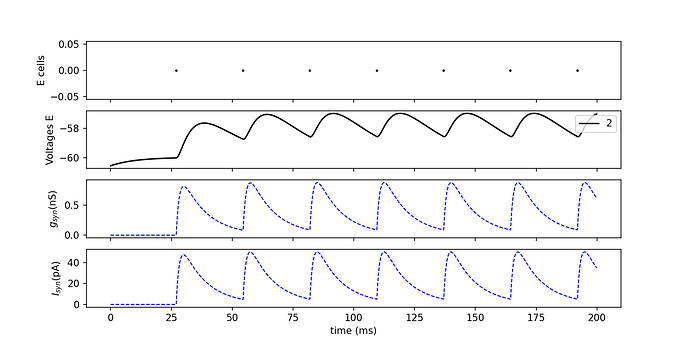 E_cell_beta1500×750 63.6 KB
Am I right up to now?
The question is how to include H_{\infty}?
or adding H is just complicating and we can safely approximate it.
Biexponential synapce eqation
Synapse implement
mstimberg 4 January 2021 10:42 #2

Hi. Your equations look correct to me, except maybe for the normalization (Tau_r needs to be tau_1 and Tau_d needs to be tau_2 I think, but maybe that’s already the case).

Regarding the H_\infty function: there are two different ways to describe synapses. One approach is to describe them as a PSP (or PSC) triggered by an instantaneous event, the pre-synaptic spike (in equations, this is often written as an expression involving the Dirac delta \delta(t - t_\mathrm{spike})). This is the most common way to describe spikes in Brian and this is what you used here by having something like on_pre='s += w' in your Synapses description. The other approach is to describe everything as a continous function of the pre-synaptic membrane potential, i.e. without any reference to an instantanous spike that triggers the synaptic event. This takes a form like the equations you cite in the beginning, where H_\infty refers to the pre-synaptic membrane potential. Typically, the parameters (in your equations \theta^H and \sigma^H) are chosen in a way that if you plot H_\infty for pre-synaptic action potential waveform, you will find that it more or less looks like an instantaneous pulse, i.e. close to a Dirac delta. I would say that you need this more complex formulation only under special circumstances, e.g. when modeling graded synaptic transmission where the effect of a spike depends on the pre-synaptic waveform. There are two main disadvantages to this formulation: 1) it is computationally much more demanding, since you have to update the synaptic conductances at every time step for each synapse, even in the time steps where the pre-synaptic cell did not spike (i.e. where H_\infty is basically 0) and 2) it requires your pre-synaptic model to have a somewhat realistic representation of an action potential. This excludes most integrate-and-fire model. You might get away with using an EIF as in your equations, but I would not recommend it as the exact value of H_\infty for a spike will depend on timing details.

In general, an approach for the continuous coupling approach would make used of summed variables to update the PSP at every time step.

Very informative.
You are right, The synapse equation come from Terman 2002 for STN-GPe circut and neuron model is HH type and I use EIF model for simplicity.

Just to share something if some one has any idea:
Blow figure are the time course for simple form and including H_{\infty} in HH type neurons. One thing that is noticeable in I_syn is that we have negative value which I think is coming from v-v_ref in synapse term:

it is sometimes negative. I ask from some one and he believed this a common mistake among people and we need to consider a constant value (constant negative or positive) instead of this term.
Please let me know if I am wrong or there is better idea about it.

Not sure whether this is still relevant, but I do not think this is a mistake nor that V-V_{ref} should be replaced by a constant term. If you replaced it by a constant term, you’d change a conductance-based synapse model to a current-based model, i.e. use a simpler approximation to the biophyical system. Of course, you could do that for performance reasons in a big network or just generally for simplicity, but it would be a less precise model. The actual current that is flowing in real neurons is dependent on the voltage potential. For excitatory synapses this is not that relevant most of the time, since the membrane potential is usually very far from the V_{ref}. For inhibitory synapses, this can make quite a bit of a difference though (cf. shunting).
I see that this looks odd during an action potential, but this is a bit of an extreme situation. I think any synaptic currents should be small compared to the sodium and potassium currents during a spike, so that an excitatory synapse has an inhibitory effect should not matter much.