Following up the discussion with @DavidKing2020 in User-provided function in run_regularly, here’s a little example showing that you can include rather complex programming logic in C++ standalone mode, with only basic Brian functions (i.e. without writing C++ code yourself). In the below example (full code here), I use a TimedArray to store 10 stimuli for 5 neurons, each 100ms long (each of the stimuli here is just a constant rate for each of the neurons, but it could also be time-varying).

The group that transforms the rates into spikes is a NeuronGroup, which gives us more flexibility than a PoissonGroup. It does not simply replay the stimulus over time, but instead uses a start_t variable (set to t at the beginning of each block) and a stimulus_idx to shift the time so that it reads the stimulus from the correct block. It also multiplies the rate with a factor, so that we can scale it up if needed.

The target neurons are very simple lif neurons with an exponential synaptic current (connected 1–to–1 with the input neurons, but this could be different):

Now, we’ll have to be a bit creative. Our criterion for a “good trial” is that we have a certain number of spikes across all neurons for this block. To make this number easily accessible, we create a dummy group that stores this value and increase the spike counter for each spike via a synapse. We also reset the counter after each block:

Finally, we can put everything together via a synapse that connects this spike counter to the input neurons, and changes the stimulus_idx and stimulus_strength according to our rule: here, we want to switch to the next stimulus if at least 5 spikes were recorded or if we have exceeded the maximum number of trials. If this is not the case, we keep the same stimulus, and multiply its strength by 1.5. Since we still don’t have proper support for some kind of if operator in Brian code, we’ll have to work around by multiplying with 0s or 1s:

The model is now complete and should do what we want. Unfortunately, we cannot dynamically change the runtime of a simulation in C++ standalone mode, so we have to run for the maximum possible time:

This should not be that bad in practice, since we switch off the stimulus by setting its strength to 0 if we go beyond the last stimulus. Simulating the unnecessary time should therefore be relatively quick.

Here’s a little post that shows that everything seems to be working as expected (note that stimulus_idx continues to increase in the final period, but this does not affect anything). 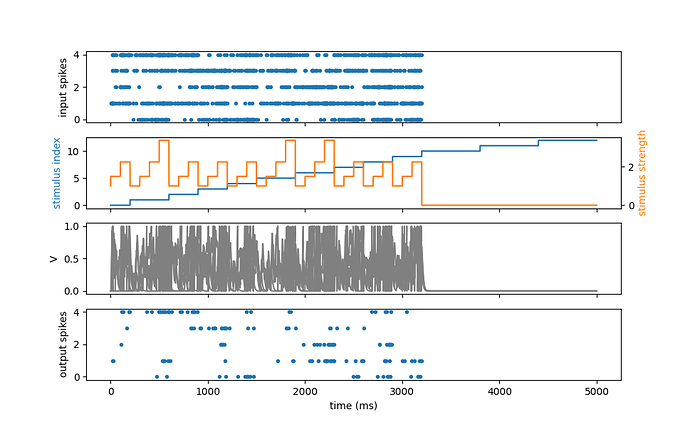